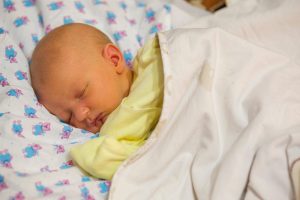 In order to maximize the clinical benefit of the Kasai hepatoportoenterostomy in biliary atresia (BA), time is liver. If operated on in the first 60 days of life roughly 70% of infants reestablish bile flow. If operated on even younger, such as at 30 days old, there is significantly increased survival with native liver[i]. HIDA scan is a controversial step in the diagnostic pathway for biliary atresia. To HIDA or not to HIDA in possible biliary atresia – that is the question.

The HIDA scan is often used as a catch-all term for hepatobiliary scintigraphy using derivatives of iminodiacetic acid (IDA). Tests such as PIPIDA, BrIDA, DISIDA, are included when referring to the HIDA scan in this article. In theory, the HIDA scan should make for an ideal screening test for biliary atresia. We are trying to figure out if bile is excreted into the bowel. If so, the baby doesn’t have biliary atresia. A 2013 systematic review and meta-analysis of HIDA for the diagnosis of BA determined that HIDA scan has a cumulative sensitivity of 98.7% (range 98.1-99.2%) and a specificity of 70.4 (range 68.5%-72.2%)[ii]. A subsequent 2015 meta-analysis found the sensitivity to be 93.4% (range 90.3%-95.7%) and specificity to be 69.2% (range 65.1%-73.1%)[iii]. Regardless, the specificity isn’t near good enough to correctly identify biliary atresia, but the sensitivity makes it a reasonable screening test for biliary patency. The question remains how much does this add to the workup of the cholestatic infant? Many of the potential causes of neonatal cholestasis such as Alagille syndrome, idiopathic neonatal hepatitis, and parenteral associated cholestasis commonly have non-excreting scans from secondary hepatic congestion. Put more succinctly, “scintigraphy adds little to the routine evaluation of the cholestatic infant, but may be of value in determining the patency of the biliary tract, thereby excluding BA.”[iv]  To further complicate matters excretion of contrast into the intestines does not always exclude BA. But, why?

When ordering a HIDA scan for BA it is important to remember that the disease course is progressive fibrotic obliteration of the extrahepatic bile ducts. If a HIDA scan is ordered too early in the disease course, results can be misleading. One case series reported 6 patients found to have biliary atresia who had biliary patency on initial HIDA scan. Five of these cases were found to have decreased or delayed excretion[v]. This reflects the early changes in the disease before complete obstruction occurs. This is the same time period for the infant with BA where surgical intervention would be most beneficial. It is our suggestion that if you choose to order a HIDA scan, any abnormality should limit the test’s ability to definitively rule out BA. If instead you decide to obtain a HIDA scan before proceeding to cholangiogram, be wary of a negative HIDA scan and persistent jaundice. In this case have a low threshold for reordering the scan after a few days if the cholestasis has not resolved and you are still not ready to perform the cholangiogram.

Pretreatment with phenobarbital can improve the specificity of the HIDA scan, but is it enough to significantly help? The suggested pretreatment protocol to improve HIDA specificity is phenobarbital at 5mg/kg per day for 3-5 days[vi]. The theory behind this is: pretreating with phenobarbital induces hepatic enzymes further stimulating biliary uptake and excretion. This will not change the outcome of a scan if the extrahepatic bile ducts are obstructed, but will make excretion more likely in cases where there is poor uptake from congestion. In the 2013 meta-analysis pretreatment with phenobarbital was found to increase the specificity of the HIDA scan to 72.2% [69.4%-97.8]. Uh, like a 2% increase? So not only do we not gain enough in specificity to make pretreatment worthwhile, it delays the diagnosis and time to take the patient to the operating room decreasing the success of the Kasai procedure.

There are certain situations where HIDA is even less useful. Beware the HIDA scan in the preemie on parenteral nutrition[vii]. Preemies on TPN are more likely to have TPN associated cholestasis which will also cause diminished tracer excretion. And finally, if the cholestatic infant has persistent acholic stools, a HIDA scan really doesn’t add anything that isn’t already clear from the clinical picture. An important tool for both clinician and parents, we have linked a stool cardwith images of cholic and acholic stools because one person’s clay is not another’s.

The HIDA scan can have value as a screening test, but it is important to realize its limitations in a progressive disease. Waiting 5 days for pretreatment is not recommended, especially when subsequent testing of greater value such as liver biopsy has an associated turnaround time. The one exception is if you are already planning an operation but the delay to operation is several days. Recent case reports have shown that it is safe to skip the HIDA scan entirely and proceed with the more invasive gold standard testing such as the cholangiogram and liver biopsy in the infant with cholestasis. To HIDA or not to HIDA in possible biliary atresia? If it helps you get to more definitive testing or if it helps rule out BA in a patient with low likelihood, go for it. However, chances are you probably don’t need it for the diagnosis of BA.