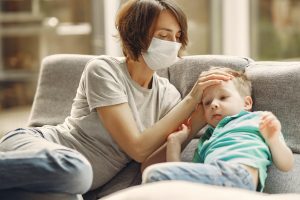 Postop day 1 fever is never atelectasis. It has been blamed for decades while even the latest editions of surgical textbooks disseminate this myth1. Whilst both fever and atelectasis are extraordinarily common after surgery – occurring in up to 40% and 90% of patients, respectively2  this is NOT the cause on Day 1. It is time that we exonerate this myth.

Postop day 1 fever is never atelectasis, it is due to inflammation and trauma of surgery. The concept that atelectasis was causing fever was derived principally from a study showing that alveolar macrophages sampled from an atelectatic rat lung demonstrated increased production of IL-1 & TNF, two known offenders of the febrile response. It was the macrophages responding to tissue damage caused by ligating the rats’ mainstem bronchus not the atelectasis3,4. According to the Matzinger danger model, the immune system responds to damage5. Damaged cells send out these alarm signals, called damage-associated molecular patterns (aka DAMPs), which activate innate immune cells to release pyrogenic cytokines, such as IL-1. The pyrogenic cytokines induce fever by acting on the hypothalamus. This theory also explains how bacteria cause fevers through the DAMPs co-conspirator, pathogen-associated molecular patterns (aka PAMPS). The short story is: DAMPS and PAMPS cause inflammation4.

Still not convinced? Well, another often-cited study on atelectasis was conducted on patients who underwent open-heart surgery2. On the first post-operative day, they found that 90% of patients with fever had atelectasis, but 75% of patients with atelectasis did NOT have a fever.  Again, a case of an association, not causation. If you needed more evidence, there is also an entire systematic review revealing similar conclusions4.

The general treatment for atelectasis is using some witchcraft machinery, such as incentive spirometry. The next time we have a day 1 post-operative patient on rounds with a fever, make sure they take a deep breath and voila – no fever! Sounds crazy? Perhaps because it is. But, before we suggest burning all the incentive spirometers in the hospital, we have to acknowledge that just because we absolve atelectasis from this particular crime does not mean it is ok to have atelectasis. Atelectasis still causes derangement in normal lung physiology and decreases forced vital capacity6, but that is a whole other topic of discussion.

It is crucial to understand that even routine surgery and general anesthesia elicit a massive stress response. This alone, or in combination with tissue damage, are the main contributor to  post op Day 1 fever.  All things being equal, if we can accept an early rise in the white blood cell count without firing the sepsis workup alarms, we should also be able to look past a fever.